You are here: Home / lumber 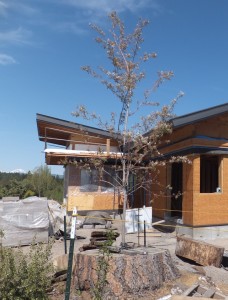 The memorial to the ponderosa pine – a service berry tree is planted in the hollowed out stump.

Near the main house structure of Desert Rain  is a service berry tree planted inside a large stump.  It is a memorial to the magnificent ponderosa pine tree that once graced the property.  In the fall of 2009 in the very early stages of design and deconstruction of the existing houses on the site, the ponderosa pine posed a difficult decision.  Chris Hart-Henderson, landscape designer with Heartsprings Design has been with the project since Desert Rain was still a concept. She came in early to help guide the process of design in relation to existing vegetation, the orientation of the house, and how to take advantage of the vegetation and the views.  Part of Chris’s task was to help negotiate Barb and Tom through the process of weighing in the value of existing trees, including the aged ponderosa; what was the inherent value, the long -term value, the longevity? Should the home be built around the envelope of existing trees or should they come down? 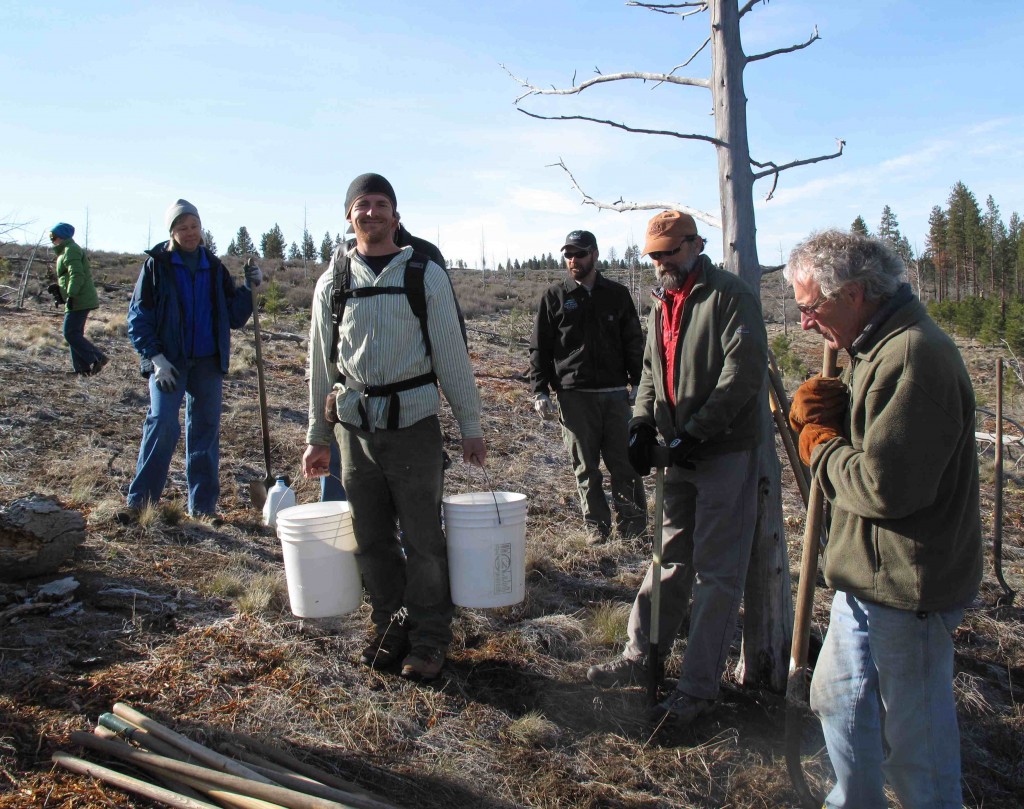 Some of the tree planting crew. Two hundred one ponderosa pine seedlings were planted at Shevlin Park to balance the removal of the 201 year old ponderosa at the the Desert Rain site. 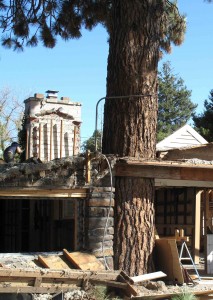 The ponderosa pine as the old house on site was undergoing deconstruction.

Barb was fond of the ponderosa and had concerns that removing it would negatively impact the environment and drastically change the character of the property. From the design and build viewpoint, there were concerns about the health and age of the ponderosa. The height and span of the branches created a good deal of shade that would be detrimental to the proposed solar energy system.  In the end, the difficult decision was made and the ponderosa came down.

Barb and Tom held a neighborhood contest to guess the age of the tree.  The winner received an artisan spoon, carved from the wood of the tree.  The ponderosa was estimated to be 201 years old.  In addition to the on-site memorial planting, Barb, Tom, friends, and volunteers planted 201 ponderosa saplings in Shevlin Park on the westside of Bend.  Part of the ponderosa was milled into lumber that will be used on site for fencing, benches, tabletops, and landscaping.  Some of the larger timbers have become inventory for future building.

Tom and Barb with the ponderosa logs in the background.

Ponderosa pine is one of the most important timber species in the western United States. Approximately 1.3 billion board feet of ponderosa pine lumber is produced annually out of Oregon, the largest supplier in the United States. It is popularly used for the construction of buildings. Contributed by USDA NRCS National Plants Data Center 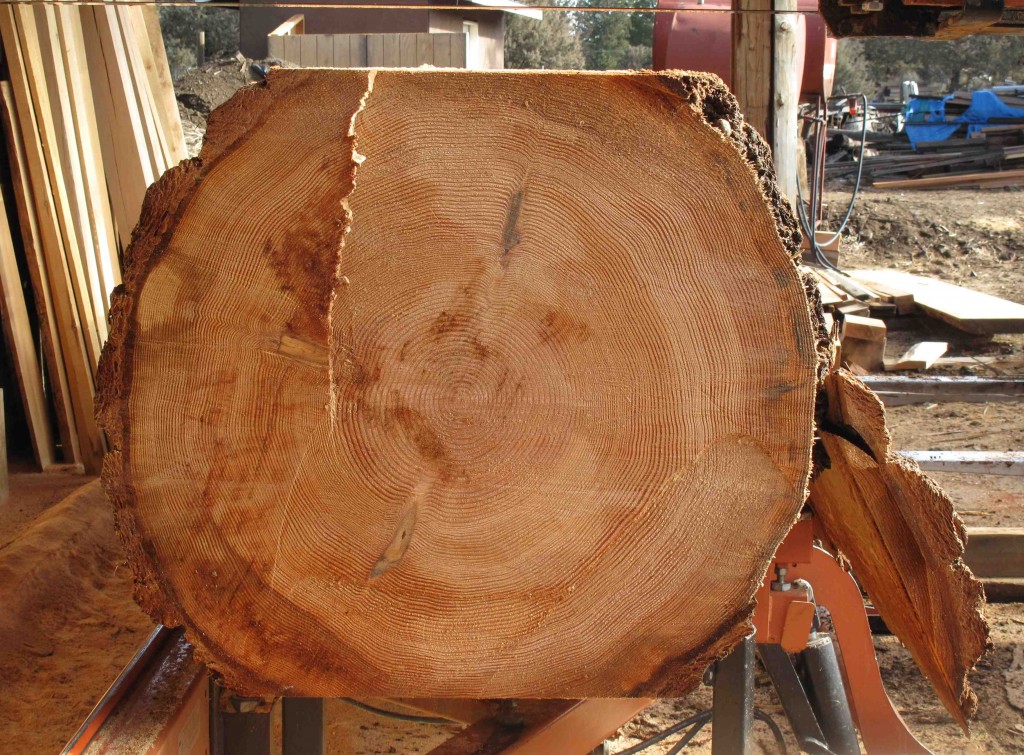 Al Tozer, designer, with Tozer Design, incorporated the ponderosa memorial into the design plans. Al uses simple organic elements in his work.  He had the idea of a ‘paint brush stroke across a white canvas – an arcing stroke’. He came up with the idea of a curved wall that flows from indoor to outdoor spaces. Inside, the graceful curving wall separates the public spaces in the house from the private more intimate spaces. Outside, the wall will overlap and continue to wrap around the ponderosa memorial.  Al defines the look on a blank sheet of paper, ‘it is like the start of a Miro painting – simple curving lines that overlap. That creativity and geometry is imbedded into the house, and the house is wrapped around that organizing element’. 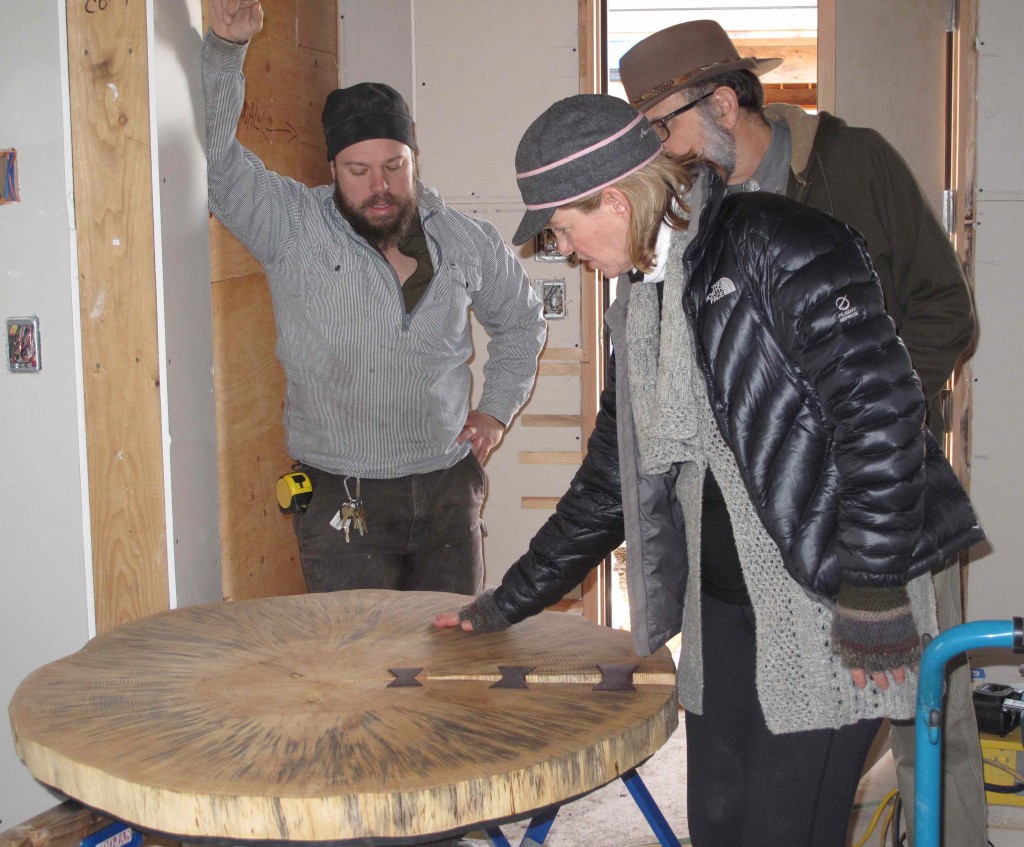 Barb and Tom admire the memorial plaque created by Bill Sturm of Oregon Timberworks using a slab of the ponderosa.

What is now called the ‘Miro’ wall, has become the spine of the home. When the home and landscaping are completed, the wall will visually bring the inside out and the outside in.  The reflective space created by the wall wrapping around the ponderosa memorial will give pause to pondering.  The spine and beauty of the ponderosa pine that once grew at Desert Rain, will retain its value – it will be remembered and honored. 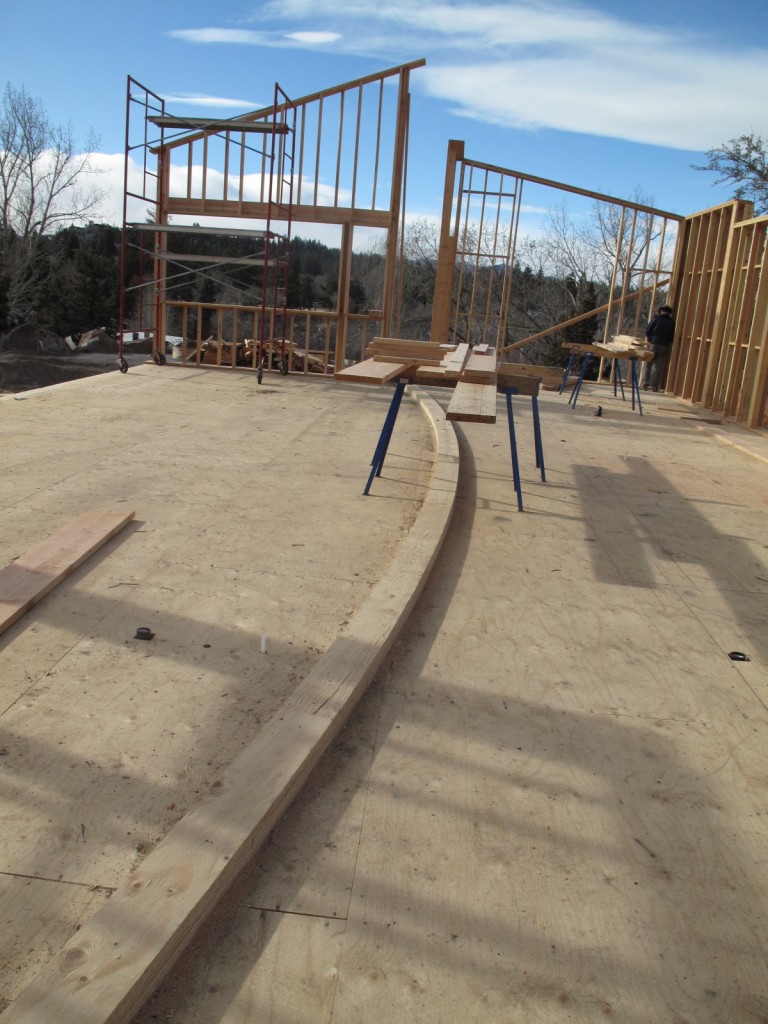 The graceful curve of the ‘Miro’ wall back in the very early stages of construction.

The Artist – Miro
Joan Miró i Ferrà (April 20,1893 – December 25,1983) was a world renowned Spanish Catalan painter, sculptor, and ceramist who was born in the sea port city of Barcelona. Joan Miro 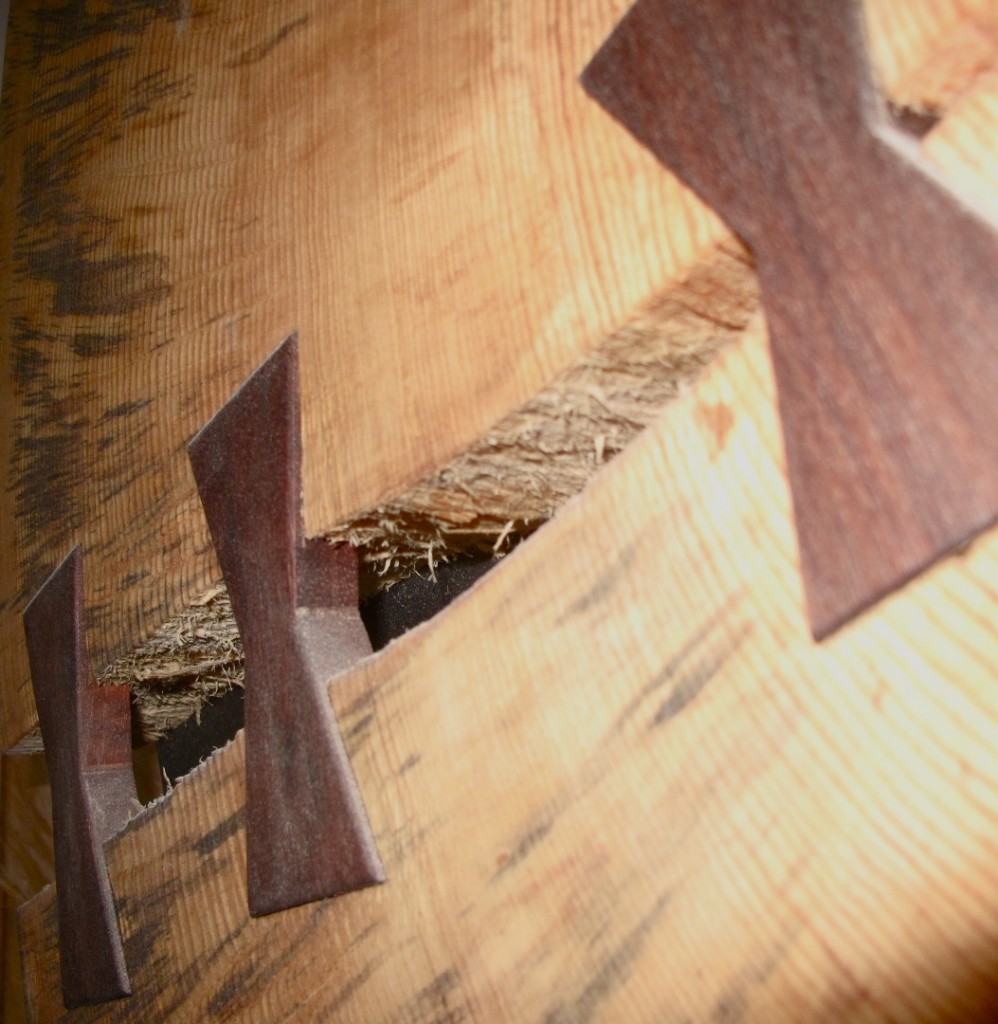 The beauty of wood – details of the plaque – walnut dovetails will keep the slab from splitting further.

Inside the house today I found a great shopping list: 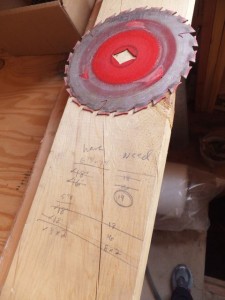 Framers Jason and Scott tallied their lumber needs on the work desk inside of Desert Rain. Situated perfectly above the list was a saw. I don’t think they realize it, but they often leave their plans and tools arranged in the most artful manner. Stumbling across the next artistic find is always something I look forward to when out on the site.

I stumbled upon this list after walking onto the lot to find a Parr Lumber forklift delivering items from the NEED column. Contractors planning for what they need is an important part of the Living Building Challenge (LBC) process. Not just what you need, but when you need it. As Nate Morgan, the project’s sales rep at Parr Lumber explains, “The idea of the [Desert Rain] project is to be as sustainable as possible, so we’ve had conversations about, hey, we realize you need that, but would you be willing to wait until you need the rest of it or more of it? This job is really about sustainability and the footprint. Because every time you [deliver] it takes resources, such as fuel, and causes emissions. So we’re all really working to overcome historic mindsets of how construction has been done.” 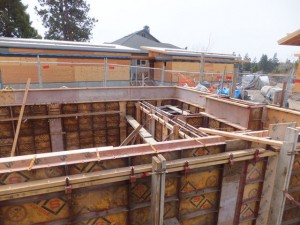 The cistern's wall forms are complete and ready for Tuesday's concrete pour.

The next big delivery of materials comes tomorrow (Tuesday, April 10), when roughly 160,000 pounds of concrete will be poured into the forms for the cistern’s walls. They’ll pump in approximately three feet of concrete at a time, then pause to use a special tool to vibrate out all of the air, and continue with the next three feet, repeating the process until the get to the top (which is about 12 feet high). Once the concrete sets the forms will be removed and we’ll all get a look at how the cistern is taking shape. 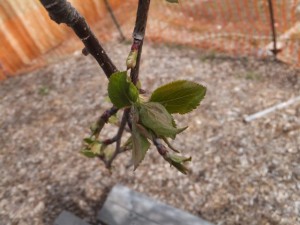 Leaf buds on one of the apple trees at Desert Rain.

Around the lot, signs of spring continue to bloom. The apple trees have small leaves coming forth, as well as blossoms. To receive LBC certification, Desert Rain must “integrate opportunities for agriculture appropriate to the scale and density of the project…” (Source: Living Building Challenge 2.0). This means there must be edible food grown on site; certainly no easy task in Central Oregon’s high desert region. But landscape designer Chris Hart Henderson is working with many edibles beyond the site’s existing apple trees. “We decided to go with plants that provided more of an indigenous culture diet and that are readily available. We have service berry, elderberry, currants, wild strawberries, rose hips, Oregon grape, choke cherries,” she says. 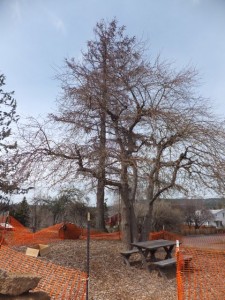 One of the two apple trees on the site.