Blog - Latest News
You are here: Home / Blog / Components and Systems / Leading the Way to ‘YES’ – Permits and Policy

The 3 ½ year epic journey over water is ending a chapter this week as work begins on the constructed wetland at Desert Rain.  For Morgan Brown, President of Whole Water Systems, ‘ the odyssey through the permitting process has been intellectually and professionally, frustrating and fascinating’. Whole Water Systems analyzed water and wastewater needs, then designed and engineered the systems that can meet those needs and the requirements of the Living Building Challenge Water Petal. 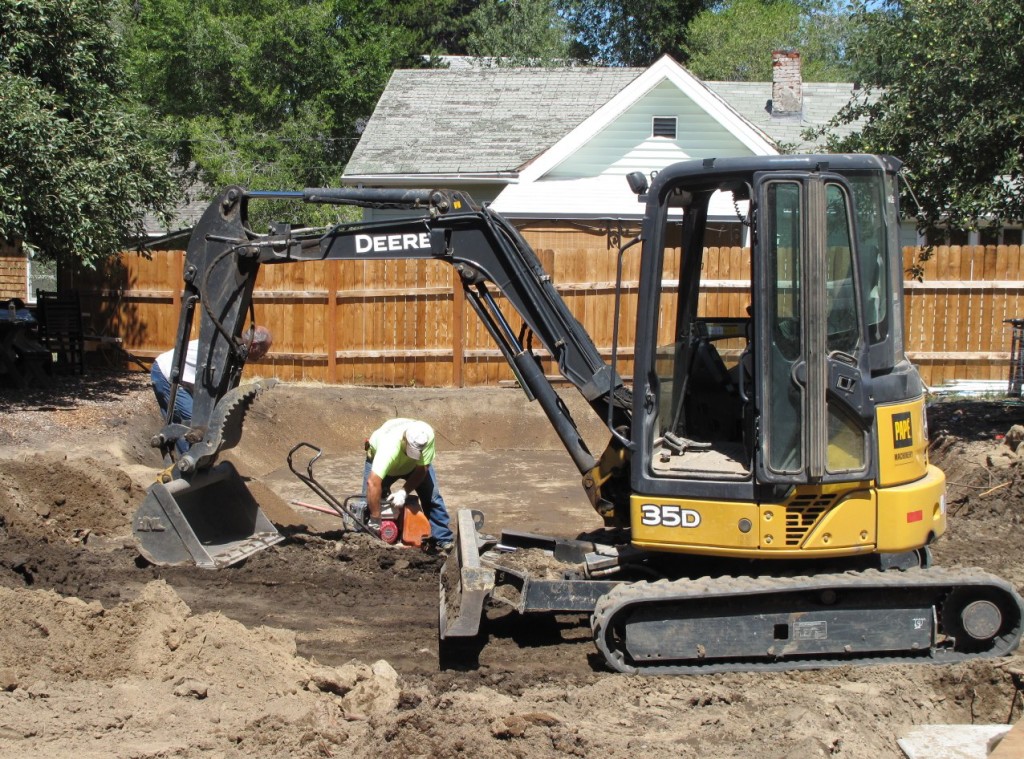 After 3 years of wading through policy and permits, excavation is finally underway for the constructed wetland.

To receive the LBC Water Petal certification, Desert Rain must collect all water on site for all domestic and irrigation use and process 100% of the wastewater on site.  The harvesting of rainwater to meet all water needs in an arid climate was overcome by designing hard-working roofs. The structures at Desert Rain have roof surfaces that maximize collection of the minimal, average precipitation of less than 11” annually.  Desert Rain is a pioneer project in the state of Oregon, as it received approval to use the rainwater for all domestic use, including, drinking water. The State of Oregon Chief building code official told Morgan Brown, ‘we’ve never had a system like this push the limits of our new state rainwater harvesting guidelines’.

Two of the most challenging issues for Living Building Challenge projects involve the Water Petal.
Net Zero Water
100 percent of occupants’ water use must come from captured precipitation or closed loop water systems that account for downstream ecosystem impacts and that are appropriately purified without the use of chemicals.
Sustainable Water Discharge
One hundred percent of storm water and building water discharge must be managed on-site and integrated into a comprehensive system to feed the project’s demands.
*Living Building Challenge 2.1 Document Water Petal page 18

The graywater and blackwater systems became a much longer story as the process moved through uncharted territory.  Initially there was verbal approval and e-mail approval from the City of Bend public works for an on-site, wastewater pre-treatment system.  As more details of the design and systems unfolded more questions and requirements impeded permit approvals. There was dialogue between The City of Bend Public Works and the Oregon Department of Environmental Quality about jurisdiction for the project. DEQ relinquished authority to the city but the city wanted a DEQ stamp of approval to proceed. 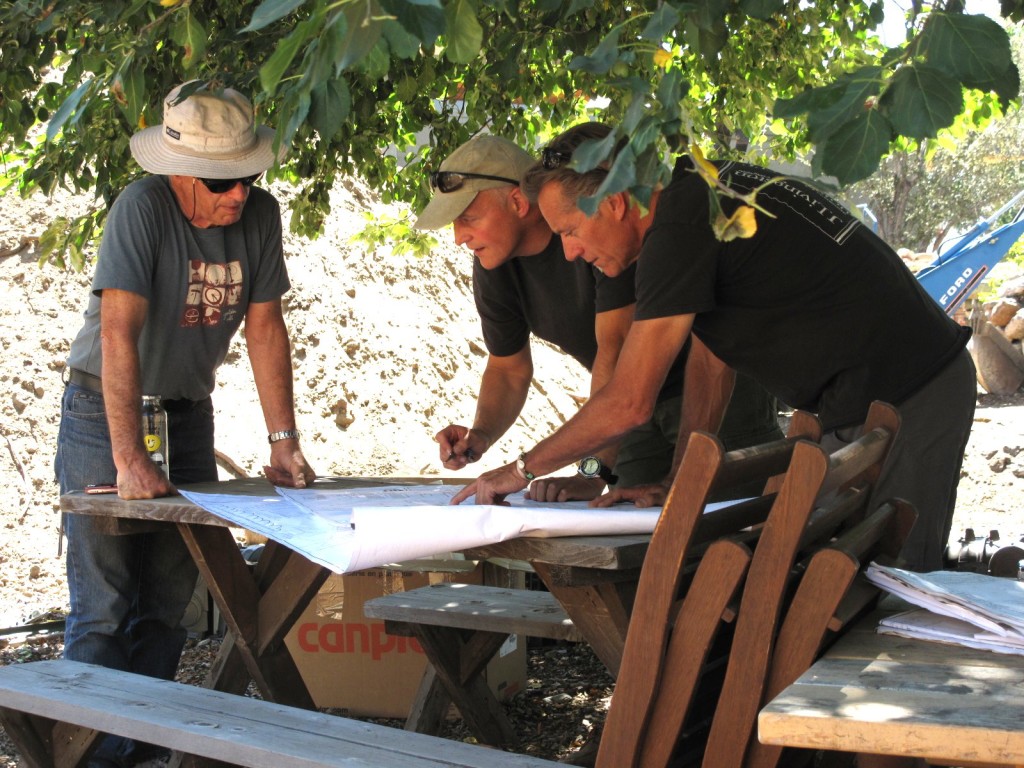 The composter/evaporator for blackwater was proving to be the largest challenge since on site pre-treatment and eventual on site treatment and reuse has never been done when there is access to a public sewer district. In order to move forward the decision was made to apply for the graywater system permit first. The new State graywater program issued final rules in August of 2011 and began issuing permits in 2012. The rules are based on recommendations of a statewide advisory committee with limitations and safeguards for reuse of the graywater. The rules define three graywater types and a three-tiered approach to permits based on the extent of treatment, volume of water and allowed uses. 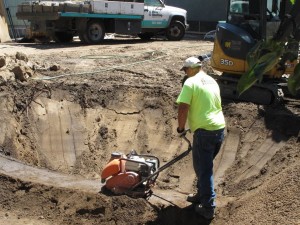 Desert Rain is one of the most innovative graywater projects to apply for a permit utilizing a primary, pre-treatment tank, then processing the graywater through the on site constructed wetland, into a 1,000 gallon holding tank, then pumping to a 5,000 gallon storage tank to be distributed for irrigation use. Due to the graywater being stored, Desert Rain had to apply for a Class II permit.  The Class II permit process is more involved requiring a system description and maintenance and operation guidelines. 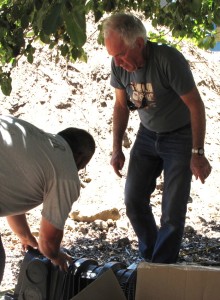 After months of design, submittals, re-design, and re-submittals, the graywater system finally received approval. In an email from Morgan Brown on June 26, 2013, he wrote, ‘Thanks for all the team effort to achieve the first. We broke in new Oregon code for graywater (DEQ had expressed a lot of interest and enthusiasm for the system and overcame Building Division concerns about being on the bleeding edge.’

Being on the bleeding edge requires patience and persistence. There is much to be learned and applied for future projects and those who follow. It became evident that language is crucial in the application process and interpreting code at city and state levels. Determination between ‘code’ and ‘guidelines’ became a significant factor, as did the naming of materials. The initial plans submitted referred to the graywater tank as a ‘septic tank’. Under city code, ‘cesspools and septic tanks’ are not allowed within the city limits where a public sewer system is available.  The tank at Desert Rain would be used as a ‘primary treatment tank’. When plans were re-submitted with the new terminology, the permit was approved. 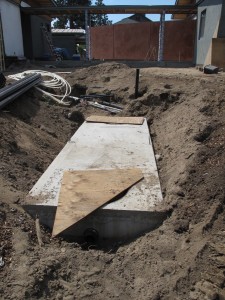 A rose by any other name… language became crucial in the permitting process. The naming of the ‘primary treatment tank’ was the difference between a ‘yes’ or a ‘no’.

Morgan admitted there were many moments of frustration. There was a point of ‘make this happen or give up’.  He acknowledges  regulations are in place to get all channels of standard approval; the DEQ, Health Department, and City Public works are the major channels. The City of Bend has some progressive sustainability language regarding building. On the other hand, it is someone’s job to cover the risk. ‘To get to ‘yes’, the risks must be removed, Morgan said. ‘The code book is full of reasons to say, no. We have to be able to find ways to, yes.’  In the end, the solution will most likely be political – lobbying for change in local and state building codes to embrace progressive, sustainable design.  Desert Rain systems have been pushing the limits of existing regulations. With the designs, engineering, and monitoring of the systems in place  –  Desert Rain can begin, leading the way to ‘YES’.

STAY TUNED FOR MORE ON THE WATER STORY AND SYSTEMS: CONSTRUCTION OF THE WETLAND, AND THE PENDING PERMIT FOR BLACKWATER 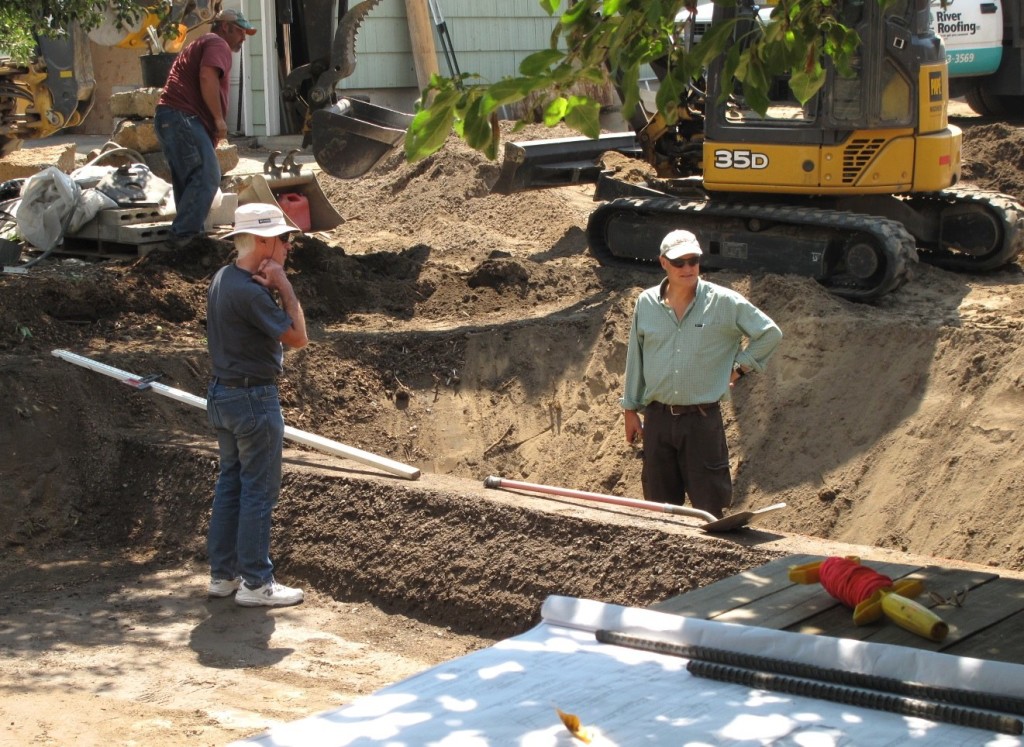 Morgan Brown (right) and Patrick Fitzgerald with Whole Water Systems stand in the wetland that has been pending approval for many, many months.

Want to join the discussion?
Feel free to contribute!

Good Wood Water in the Wetland
Scroll to top